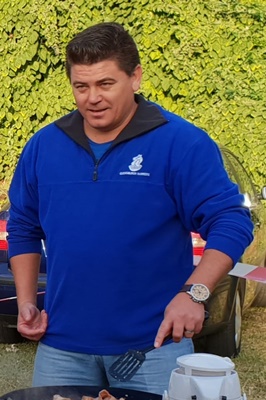 I enjoy quotes and try to use them in the right context, not always successfully, but I found a few that I feel everyone who knows this fun-loving gentleman suits him well! Here goes:

“Leadership has been defined as the ability to hide your panic from others.” Lao Tzu

“The problem with being a leader is that you’re never sure if you’re being followed or chased.” Claire A. Murray

And lastly, before getting carried away:

“Leadership is being the first egg in the omelette.” Jarod Kintz

This man we speak of is none other than our own leader and chairman of the Queensburgh Harriers – Lucas Esterhuyse! 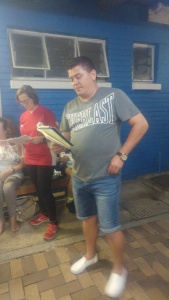 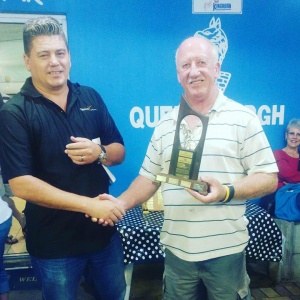 For those who have never had the pleasure of meeting this guy, he is an inclusive, funny, fun-loving, supportive, humble, hard-working, broad-shouldered, non-discriminative, light-hearted, soft-hearted, strong, example setting and very Afrikaans gentleman.

In this series we wanted to show everyone the great people we have in our family otherwise known as the Burra, and who better to talk about this week than our own chairman. Standing for his third year in a row this year we have seen a marked increase in a variety of things. Forming a great team around himself, some of which flocked to support him, he has led from the front. He is a great example of true leadership which is someone who lets people operate in their strength by getting out of their way but making important decisions and taking the heat when needed. He does this without an iron fist but with humility and always finding the humour in everything. Boy, does he have some stories to tell that’ll make you wet yourself or gain a six pack from laughing, especially if you can understand the taal.

We have seen a greater exposure of the club, the most successful running of the Mineshaft 15 km annual race we host, greater focus on juniors and achievements and overall a better perception of the club. He is the first to admit we are not perfect but really has the best interests of the club and all its members at heart. The amount of times he has stepped in to do the gazebo at races, been called out at odd hours to help with something and the first in line when there is a problem to be fixed or solved, helping at water tables for long runs, and first to open or last to leave at events, time trials and our race.

So, I asked Lucas some random questions to highlight his other side, or should I say his usual side😊

CH: What is your funniest running story?

LE: Besides the one of having to almost knock out a motorist for almost running me over after a marshal in a race told him to stop haha. We were doing a long run with some of the club and on the way back, we were far away from any shops and long way from where we started, I was chaffing badly in the groin area. We stopped at a petrol station and started digging in the bin to find anything that will relieve the pain as it was unbearable.  I found some car oil and decided what the heck – and applied a generous amount in my pants. You won’t believe it helped 100% and didn’t chafe or have anymore pain the whole way back! 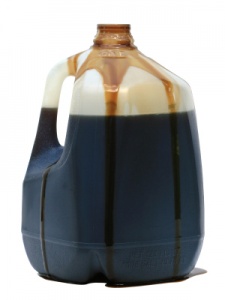 CH: for the readers, do you know which oil it was in case others find themselves in the same predicament?? (just kidding)

What body part wouldn’t you mind losing and why?

LE: My Right knee and get another one so I can do my 10th Comrades marathon.

CH: What is the dumbest way you have been injured?

LE: After Comrades Marathon one year, I was asked to play rugby for Rovers, which I should never have done. I thought what the hell and got injured too.

CH: What ridiculous thing has someone tricked you into doing or believing?

LE: into doing – Johan and Fay Rautenbach dragged me into doing the Bergville to Ladysmith (52 km) without any training. I managed to qualify for Comrades but didn’t enter. Wow that was tough.

Into believing – after my first Comrades people told me I could do a sub 9 hour (Bill Rowan medal) on the next year’s down run. I tried and missed it by 7 minutes!

CH: I guess that is a great feat and proof that believing something can really turn it into reality. For some it would seem ridiculous, but I applaud that!

Lucas has a passion to see the club grow as it serves the community and supporting charity too as he always takes part in the Dare Devil run for Prostate cancer in his speedo!

Lucas was running with another local club and joined Rooie, Dean Wight and Johan Rautenbach for some of the long runs we already mentioned in Dean’s article. He became good friends with them and enjoyed the company and the people so finally joined QBH in 2008. He has done many marathons, and 6 Comrades and 6 Two Oceans Ultra marathons but stopped due to injury (as told above). His best achievement also already mentioned was a 9:07 Comrades Marathon down run.

Deon Scheepers, our vice chairman, reminds me that Lucas’ favourite phrase the last two years has been: “We will start running on Tuesday!” 104 weeks later we still wait for that Tuesday!

Often, we honour people after they have left, stepped aside or died. So to honour Lucas before any of that, I asked a bunch of people what they see in Lucas and everyone said the same, so to summarise, as I already have mentioned most of the things above: Lucas is a people’s person, who is always friendly to all, always willing to help, a team player and has loads of funny stories to tell – and he tells them well, while laughing at his own stories!

We all hope to enjoy his company at the club for many years to come and whoever takes the leadership mantle does so with the same passion and character as Lucas and keeps the trajectory going in the right direction!